This article is written to give an idea on the development process of Late Legends.

Hello and welcome to the Late Legends! This website is the source to get into Late Legends, an system for tabletop games such as Dungeons & Dragons (D&D).

Firstly, I would like to explain how Late Legends, LL for short, came into existence. I am a big fan of tabletop roleplaying because of the flexibility and the originality it can bring. The first time I came into contact with tabletop roleplaying was when I started playing D&D 3.5. With this ‘system’ I started my roleplaying adventures. It was a huge bulk of info to get into, but a lot of fun to play. It is great to see how a character can develop in a story and vice versa. Once I gained some experience playing D&D, I started thinking of running my own session. During the process of becoming a Dungeon Master and World Building, I became a bit hindered by the current rulebook of D&D. A lot of times I had a new idea that was not included in D&D, or I simply lacked the interest to look it up. Some things were strange and overcomplicated in my opinion. This does not mean D&D is bad by any means, it just was not what I was looking for. Instead of surfing across the homebrew forums for D&D I decided to create my own table-top game in 2013. This game was later dubbed: Late Legends.

Another reason for developing Late Legends is my love for video games. It is just magical what some games can deliver in their storytelling and rich battle systems. I realized that for me, this was one of the things D&D was lacking. While I understand the slow approach, I found D&D way to static in battle. Rather I would like to create a mix between strategy and luck which is fun, customizable and fast. I took a lot of ideas from video games since they fit the requirements perfectly. Games like Final Fantasy, The Legend of Zelda, Dragon Nest & Rappelz. I used bits and pieces to create a manageable health and cooldown system, a wide variety of equipment, and classes. I believe by combining all these elements Late Legends would come to a fresh and deep tabletop system.

Other systems, such as D&D, are not bad by any means. I like to try and see what Late Legends can offer. One of the hardest things during development is implementing new mechanics without making the system overcomplicated. With each new addition to Late Legends, it is challenging to balance stats, classes, and gear.

The more I worked on Late Legends, the more respect I got for the other systems out there because it is a lot of work. My aim for this book is to serve as a guide that motivates you to start playing Late Legends.

There was a lot of work to be done to create a whole system. For me, the best way to create was to play a story while continuing to expand and improve the system along the way. This turned out to be a lot of work but provided me with all the testing I needed to check if an idea had potential.

I gathered a group of friends who were interested in the idea of playing a homebrew system. My approach for the system has not changed since the Halloween party, empower the players and let their choices affect the story. The name Late Legends was born: Late, since it felt like a step back to avoid computers and create a tabletop game, and Legends to give emphasis to the player characters.

My goal with Late Legends is to create an easy-to-use system that allows you to play interactive stories with a deep and exciting battle system. I took inspiration from RPG’s and other games, for example, The Legend of Zelda and Final Fantasy. For me, both of these game series brought a lot of enjoyment in story and Battle Systems. The first story I ran began with role-playing and battle systems. I always required an Excel Sheet (managed by the Storyteller) to determine things like incoming damage. Since there were no classes yet, the players could create their own. Together with creating a story, I put a lot of time in creating and balancing the classes, together with the players. I also took some steps in designing sheets and along the way kept improving them. With a handful of classes and 30 unique skills, we were able to play a large part of the story.

As for most things in Late Legends, I created the sheets myself. The sheet I started on was the Legend Sheet, meant to track most common things of Late Legends for a Player. The example below was made in 2013, using mostly Photoshop. For the classes, we had a Google Sheets document for creating the class. I allowed my Players to create their class, though all the balancing was done by myself. Once I was satisfied with the state of the class I copied everything over to an Illustrator Template that I made for Late Legends. 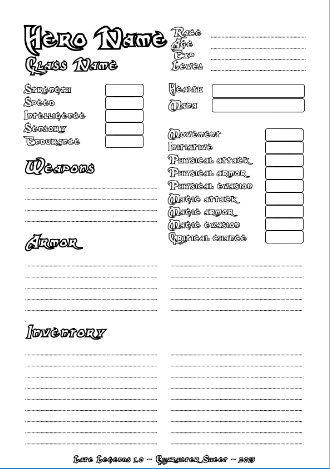 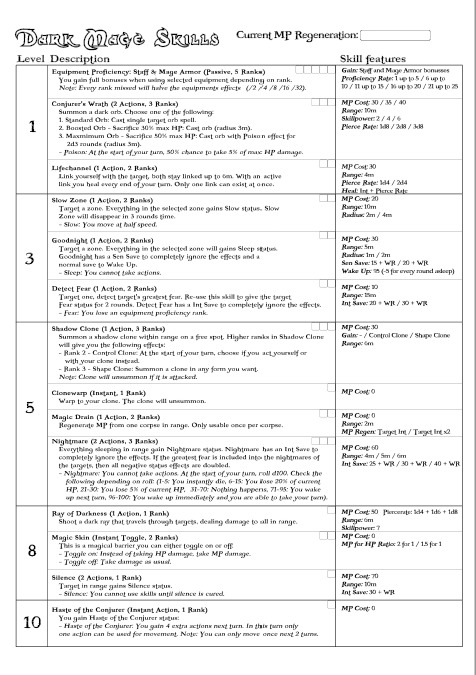 Next time I will go more in-depth on the way I kept developing Late Legends.

Creating by playing | Next »